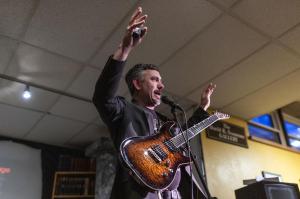 Winston Churchill once said, “We shape our buildings; thereafter they shape us.” This is probably more true of businesses. They create and distribute the products and programs we use every day from computers to chips, cars to cash machines. Their presence is so pervasive that they are practically invisible. But once the code is revealed, it can never be concealed.

If you live in Centre County, Pennsylvania, we need to look at the code of the Nestle Corporation and ask some hard questions. When we start asking questions, we can make truly informed decisions about economic development and look for ways to “do well by doing good.”

Today, economic development is undergoing a sea change. “Back in the day” people looked for good-paying jobs, the assurance of a stable career, and steady growth. The town’s company made a company town and as long as the business made the buck and the buck had somewhere to stop, people were good with it. That’s not quite true anymore.

Folks all over the United States on different sides of the political aisle embrace corporate social responsibility practices. A 2017 study by Cone Communications found that

63% of Americans want businesses will take the lead to drive social and environmental change…in the absence of government regulation, 78% want companies to address important social justice issues, 87% will purchase a product because a company advocated for an issue they cared about and 76% will refuse to purchase a company’s products or services upon learning it supported an issue contrary to their beliefs.

Whether they are investment in local schools, in 100% clean and renewable energy, that all workers along their supply chains are paid well, or working with communities and NGOs to safeguard land and water, people want leadership and partnership from our businesses. We admire CEOs who take on big problems and make their businesses fertile beds for social and environmental solutions, especially if that means a long-term investment in communities to solve local problems with global impacts.

That brings us to Nestle. As I’ve written here over the last few days, they have racked up human rights abuses in developing nations while running roughshod over rural communities across the United States. Spend fifteen minutes on Triple Pundit and you’ll be appalled: slavery, $100 million fines for lead contamination, hiding facts about consumption and brinksmanship with local communities. And yet, some folks think that the lure of jobs is all that matters.

They see Nestle as a good replacement for the now closed Titan facility. When it left, the township lost a tax base and 280 jobs. As they note, Nestle could bring that back and have it rely on an abundant natural resource, namely water. I’m not going to deny that Nestle could provide a economic rebound for the area. But this is not the whole story.

If we make everything about just these jobs, we do so at the expense of other values. For example, Nestle’s CEO has stated that he doesn’t accept that water is a human or public right. Putting aside the fact that UN Resolution 64/292 recognizes a right to water, what does this tell you about Nestle’s business model? It tells any reasonable observer that the company will use their access to public water to create profits to the detriment of others. If a community wants to turn off Nestle’s spout for their predatory water practices, Nestle will ignore or litigate their way into getting what they want, from whoever they want it, when they want it. That’ll be ratepayers of the Spring Township Water Authority.

Here is another thought. At a time when public investment in infrastructure has greatly declined, who stands to gain? The $4.75/thousand gallons that ratepayers will soon put up for Spring Township water authority might be paying the bills. But across the US, we’ve seen the impacts of declining investment. And you don’t have to look far: Mountaintop near Snow Shoe and Rock Springs Water Company in west Ferguson Township both. Nestle’s already shown that they can use these crises to burnish their image, donating their bottled water while technicians from the State College Borough Water Authority help fix the Mountaintop leaks. If something similar happens to Spring Township Water Authority, who has the biggest straw and the financial resources to grab and privatize the community’s water? You know.

I’m not saying it will happen. I’m saying it can and that the logic of Nestle’s CEO and their record makes that slippery slope a logical conclusion. If they can just bottle all that water and sell it like any other “foodstuff” commodity, then they will sell Spring Township’s water right back for a markup of 100s of times. Oh the magic of the market. Black magic that is.

If businesses shape us, then Nestle isn’t the kind of business we want here. Their track record shows they will pilfer our resources, run us over, consolidate their wealth, and use PR to make themselves look good. What we need is companies that will help our people and Spring Creek thrive, work with us, and generate shared prosperity. When we do that, we will be creating fair and sustainable solutions that make our place—and the world—better.